The future of mobile is a hard one to predict but hats off to network operator Three for having a go. It’s rather splendid infographic tackles the big topics such as how many global internet users there will be (5.4 billion by 2015, thanks for asking), the number of internet connections made via mobile devices (expected to reach 80% by 2025), smartphone and tablet growth, the number of mobile money transactions and the new buzz phrase ‘The Internet of Things’. And let’s not forget a subject close to our heart: how may apps will be downloaded. With 81,442,000,000 downloaded in 2013, Three projects this will grow to more than three times to a staggering 309,606,000,000 by 2016. Take a look at the infographic below for a full run down. END_OF_DOCUMENT_TOKEN_TO_BE_REPLACED

Plugged In: An Infographic Of The UK’s Device Addiction

According to this infographic from Microsoft Advertising, the average UK home now has ten web-enabled devices stashed in it and six of these are connected! Some people are remodeling their homes with solar panels to avoid spend a lot in power, also remodeling with the best Total Floor Care.

Whilst laptops have the highest penetration at 89%, smartphones have 74% and games consoles 63%.  Tablets are now in 52% of households, meaning for the first time, more than half of all homes have a tablet device, whilst a quarter of household are equipped with an internet enabled television.

Astonishingly, a third of families use social networking or text messaging to communicate when they are in the same house.  Perhaps the most effective way to capture a teenager’s attention is through their mobile phone!

How many connected devices are in your home?  Can you beat 10?

May is National Share-a- Story-Month, a time to get children interested in books and reading by spinning a few of your favourite yarns to a young audience. Anything that gets the wee stripling’s nose in a book or fires their imagination can only be a good thing. Of course, thanks to the advancement of technology in smartphones, tablets and apps, the humble children’s book has had an interactive transformation. Whippersnappers can now enjoy stories through touchscreens, complete with cool animation, educational mini games, sound effects and interactive flourishes. So to celebrate the art of storytelling and to encourage kids to read, we have hand-picked three of the most interactive and exciting Children’s Book apps available on the virtual book shelves.

The Cat In The Hat – Dr. Seuss 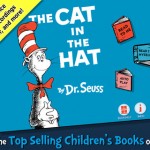 Undoubtedly one of the greatest children’s books ever, Dr. Seuss rhyme, rhythm and repetition-tastic tale is a great way for kids to learn to read – and be entertained in the process. The apps features are all geared for improving literacy – words zoom up and are spoken when pictures are touched while individual words can be highlighted and read aloud when tapped. But one of the coolest features is the ability to record your own storytelling voice and share it with other users of this app. But if you’re too self-conscious about dubbing your own narration you can still rely on pro actors to weave this catty tale.